Even if you have absolutely no interest in computer games, you have probably heard about Minecraft. If you teach or have kids, you have probably heard a lot about Minecraft. Since its original alpha version dropped onto the internet in 2009, this simple game of ‘digital lego’ has amassed over 40 million players  – not just kids but adults too, all mining and crafting in their own unique virtual landscapes.

The great attraction of the game is that it invites the player to learn ‘as we go’ through exploration and experimentation. The game offers feedback first and guides us to figure out the rules through extended play, a great way to motivate and encourage ownership.  In the early days of Minecraft, gamers would gather on forums to share information, initially trying to figure out exactly what they were supposed to do to survive once the night came and this colourful landscape of blocks turned into a world of dangerous beasts.

That sense of community has helped Minecraft become something more than a game. Search on YouTube and you will find millions of hours of in-game footage of people sharing their playing experience and teaching each other how to build amazing structures. Check the best-selling titles in a major bookstore and you may well find ‘Minecraft Handbooks’ among them. Listen to your young learners talking to each other and you will hear the language of the game.

And the language of the game is overwhelmingly English. I have seen EFL students pouring over wikis and books to learn more about the game in English. I have seen kids watching video tutorials and even making their own screencasted videos in English, all so they can go back to their game world with more ideas to experiment with. Seeing this impact, the language teacher in me has wondered how this engaging world can be tapped into for learning purposes. Here is a collection of my ideas.

Idea: Bring their love of the game into the classroom to increase engagement

Great for: connecting with learners at all levels

The most striking thing about this game for me when I first heard about it was how it was engaging even my most reluctant learners in using English outside the classroom. It was not long therefore until I put it to use to engage them inside the classroom as well.

I was working with 5th graders (aged 10-11) in Turkey at the time and had just finished a unit of work on storytelling. It was time to produce a story as a project. I had allowed them to form groups to write collaboratively but one group of two boys and a girl seemed to be struggling for ideas. I suggested they choose a setting or topic that interested them and build their story from there.

“Build?” said one of the boys with a look of excitement on his face. “Teacher, could we tell our story in Minecraft?” Almost immediately, they went from a group staring at a blank page to the most active and animated group in the class. On project presentation day, they came to class with a slideshow version of their text accompanied by screenshots from the game (follow this link to see it). The project was well-received and marked a pleasing step forward for these particular students in terms of their English writing skills.

By bringing the world of the game into the classroom, we had broken through a ‘learning block’ by connecting their personal interests to the task and topic at hand. Of course, no knowledge of the game is needed on the teacher’s part for this. As Duncan put it: “I’m getting so many Minecraft pictures, cards, foldable “Creepers” and “Steves”, and stuff that I don’t have the heart to tell them that I’ve never spent more than 10 minutes playing it.… It’s all about them and their learning.”

Idea: Reverse the roles and let your learners be teachers

Great for: Eliciting language of advice and suggestions

For more than a year, I remained in that position of knowing a little about the game and getting my students to tell me more about it through our conversations and their Minecraft-inspired work. At one time I even called it “the best game I’ve never played” (Dodgson, 2014).However, it soon became clear that to really get the most out of it as a language learning tool, I would have to get to grips with the game myself.

The opportunity came when I started up a ‘Minecraft English Club’ at my school. As there were a mix of ‘expert’ players and ‘novices’ like me, I matched them together with one expert helping a couple of novices get to grips with the game. Using the MinecraftEdu version of the game for schools (see http://minecraftedu.com/ for details), the novices took the controls while their expert partner explained what to do. At the start of each session, the experts would get together to decide what they would teach and the novices would brainstorm questions they had about the game. When at the computer, they would exchange information in English.

Once the novices felt comfortable, it would be their turn to teach me the game. This was great, not only for practising the language of explaining a task, clarifying, and giving suggestions, but also for removing the perception of teacher as all-knowing expert. In this case, they were the experts in the game, I was the expert in the language, and we needed to engage in genuine communication to help each other. 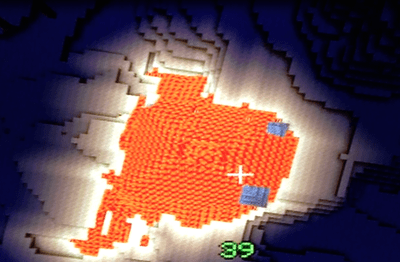 Idea: Learners produce ‘how to’ guides for other players

Great for: practicing commands and instructions

Over the first few weeks of this club, we had basically compiled a beginner’s guide to the game. With every player growing in experience, it was time to move things forward. The expert players were tasked with creating guides to crafting particular items, or building a certain kind of structure. The newer players first engaged with walkthrough guides online, either in video or text form to learn about some more advanced in-game skills. I then encouraged them to make their own guides such as ‘How to survive your first day in Minecraft’.

At first, I asked my learners to write their guides down. A simple crafting recipe for an item can be as little as a few lines for lower level learners (language learners that is) whereas a guide to building a Nether Portal or a treehouse could be longer and involve higher level language. Collaboration played a key role in this task too as the students would share and comment on each other’s guides – they were peer editing without really realising it!

One further option, which we were unable to carry out last year due to technical limitations, is to use screen capture software to make a video guide, just like all the ones they love watching on YouTube so much. There are free software options for this such as Screencast-o-matic and Open Broadcaster Software – all it takes beyond that is a bit of practice and a microphone to get them practising giving commands and instructions for a real audience.

Idea: Use Minecraft to create and present project work

Once my students have got to grips with the game, I find that as with Minecraft itself, the possibilities for using it to support their learning are seemingly limitless. Ever since that first story set in Minecraft, I have had students producing some very creative projects within the game such as:

Some of these have been realised as videos, and some as posters or slideshows made of images captured from the game, but all have been presented and explained in English. Reviewing their projects, the language is not always perfect but without the creative opportunities afforded by the game, I doubt all of these students would have produced the same quantity of work with the same enthusiasm. The more language they produce, they better I can see where their strengths and weaknesses in English are and the more I can help them to produce even better projects in the future.

Idea: Use the game world as an inspiration for journal writing

Young learners are often reluctant writers. The line “I don’t know what to write” is one I have heard many times. The great thing about an open-world game like Minecraft is that it offers a rich context to inform students’ writing and, beyond the story-writing activity outlined at the start of this article, I also encourage my students to engage in other forms of creative writing as they develop their overall language skills.

At a basic level, I ask them to write journal entries simply describing what they did in the game. As they get used to the idea, I ask them to reflect on what they learned while playing and what they want to try next time.

To encourage more creativity, I ask them to write the daily routine of ‘Steve’ (the character they control in the game). This gives them a chance to go beyond the usual routine language of get up, have breakfast, go to school, and so on. It also gives them plenty of source material as they have actually ‘lived’ that day with their character.

For descriptive writing, they can write about the virtual world around them, the buildings they have created or even poetically relate the beauty of ‘watching the sun rise over a blocky ocean’.

Ultimately, like all uses of technology in a learning environment, it’s not about what the software can do. It is about how the software can be used to engage the students and provide a context for learning. Minecraft is a game of few words but if you put it to the right use in the classroom, the words you students can produce, like the game itself, are limitless.

References
Dodgson, D. (2014) Why Minecraft may well be one of the best games for language learning [weblog]. Retrieved from http://eltsandbox.weebly.com/blog/why-minecraft-may-well-be-one-of-the-best-games-for-language-learning

McGonigal, J. (2012). Reality is broken: Why games make us better and how they can change the world [Kindle edition]. Retrieved from amazon.co.uk

David Dodgson teaches and learns at an international school in Gabon. He has previously worked in Turkey, gaining experience of working with children, teens, and adults in general English, ESP and EAP. He believes personalising the learning process is the key to success in the language classroom and has a strong interest in using and adapting authentic input for learners of all levels. He blogs at davedodgson.com and also runs eltsandbox.weebly.com, a site dedicated to game-based learning.