Close your eyes and imagine you’re holding a glass of exquisite wine, which is glinting ruby, citrine or garnet. Or a glass of water, crystalline, mountain spring water. There are slivers of something utterly delicious arranged in a chaotic fan on a smoke-grey slab in front of you. The view is breath-taking, the breeze sinuous and seductive, and your favourite piece of classical music – Satie, Delibes, Ravel, Verdi – is just audible in the background.

Can you see it? Fill in the details.

The power of words to evoke images – sensory images, sight, sound, smell, sensation – and of images to evoke, or indeed provoke words is undeniable, and that is exactly what this series of articles will be about: using images with your students – still images, moving images and images in the mind. Current generations in many parts of the world, particularly the younger ones, are the ‘multiple stimuli’ generations to a far greater extent than ever before. The teens and twenty-somethings are also the International Educational Exchange generation, the internet generation and hopefully the Peacekeeper generation. This means we need to provide even more opportunities to generate real, challenging, personally relevant language-learning opportunities. It also means that the coursebook, the board and the teacher are not enough to satisfy the psychological, motivational or linguistic needs of these students. So it seems only logical that we should be exploiting sound and vision as motivators, captivators, and generators too: motivators of learners, captivators of attention and generators of language.

These ‘Sound and Vision’ articles or posts will each focus on one activity or type of activity, and will cover not only the three types of image (ie. still, moving and in the mind) but will use different sources and resources, including the students themselves, the coursebook and sites such as youtube and ELTpics – which is where I’m going to start. ELTpics’ Flickr resource.

ELTpics is a crowd-sourced, non-commercial creative commons resource for teachers, but also set up by teachers, built up by teachers and curated by teachers (check out the Facebook group, if you’d like to be part of it). At the time of writing, there are over 24,500 images to choose from, organised into 108 sets such as Imperatives, Food or Appearance. You can use the images in class, for homework, in non-commercial presentations or teacher training sessions, or in blogs that don’t carry advertising. I use ELTpics all the time (https://takeaphotoand.wordpress.com/), in my lessons, in teacher training, at conferences and in my blogs, and I show my students how to use it too. It’s a great tool for bringing all kinds of things into the classroom without ‘intruding’ on sensitive areas of learners’ lives (but that’s another article…. ;)) and allows imaginations to be fuelled. And where there’s imagination, there’s language. It also allows you to make potentially dry but necessary lessons (exam preparation, some CLIL lessons, writing lessons…) far more dynamic, engaging and participative. Communicative as well! The first activity I’m going to share is an example of this – and is one of my favourite lessons (ie. it works!).

The Opinion / For, Against Essay or The Report

You have attended a local community meeting to decide whether recycling rubbish should be compulsory. Write a report on the meeting, giving the conclusion and your opinion.

6 images of people from ELTpics (try the sets Emotions, People, Jobs…). There should be a contrast of images and they should show adults rather than children.

1 board + chalk / boardpens (optional but useful)

Image at www.eltpics.com by Diarmuid Fogarty.

2. Make a mosaic of the 6 faces using Picmonkey’s collage maker (it’s so easy to use even I can do it).

3. Save your mosaic. I’ve been using the same one for 3 years, so it’s worth the 10 minutes it takes to make and save. You can save it as a file to project in class or to photocopy, or make laminated copies for groups to look at.

4. Put students into groups of 4 or 5. Show them the mosaic of 6 faces and tell them to think of 2 or 3 adjectives of character or personality per face.

5. Compare adjectives as a class. You don’t need to write them on the board but keep repeating them.

Tell the class they have now created 6 very different characters (hence the need for contrasting images). Review their personalities by asking students to remind you of the adjectives chosen.

6. Write the essay title on the board, point it out in the book or just say it, then ask students to work in their groups and discuss what the 6 characters’ opinions would be. This avoids the problem of students who have ‘no opinion’, whose opinions may be ‘inappropriate’ or where all students are likely to share the same opinion. Try it: have a look at my mosaic. Think about the title about Smartphones above; would the 6 people in my mosaic have the same opinion? 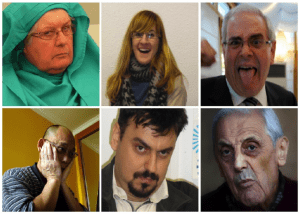 7. Elicit the class’s ideas regarding the 6 characters’ opinions and write them on the board or repeat them clearly. Ask students to write them down under the headings For and Against.

8. Students can now discuss and choose three of the For arguments and 3 of the Against to use in their essay. Be sure to work on the appropriate language for this type of essay – I often find an example of the ‘Some people believe that….’ type phrases in coursebooks and ask students to modify them as appropriate, so they’re suitable for a report: Some of the participants believed that….

9. Work on the ‘writing an essay’ stage as you would normally do.

You have now turned a potentially dry writing class into an imaginative, creative, dynamic vocabulary review, with speaking, listening (to each other), reading (each other’s ideas for opinions on the board, an exercise in ‘critical thinking’, collaborative work and, of course, writing. You may want to add extra reading by asking students to leave their essays without a conclusion, then you pin the essays round the wall or leave them on tables, ask students to read each other’s work and decide what the conclusion should be for each. This can be done, again, in groups of 4 or 5 where students read the essays written by students in a different group.

Try it! And have fun.

Beyond ELT: How Can We Revitalize Teaching?
Critical Thinking - The Key Competence for the Z Generation
How NOT to Email Your Teacher, Professor or TA
Highlighting the Importance of Socratic Discussion
Engaging Students in an Intensive Reading Class
An Introduction to the Benefits of Using Sign Language for Function Words
Phil Wade Interviews: David Dodgson
Communicative Language Testing﻿
Teaching English with Pictures
Learning to Listen With Our Eyes
Funny Tales from the English Zone
Fun Christmas English Games For Beginner to Intermediate Learners
Foreign Language Teaching
The Essence and True Purpose of Education
Teaching English Using TED Talks
IELTS speaking – What is Cambridge Looking for? Part 2 – Lexical Resource

HI there! I'm a writer, teacher trainer and teacher in Western Spain, and I've been in ELT since the late 80s - so I've seen many changes! I've published coursebooks and resource materials, and co-curate ELTpics. I also have a few blogs including macappella and Take a photo and....