One of the students in my pre-IELTS class was not hesitant to voice his desperation upon being asked to write a short introductory paragraph about himself. That was not the first time I had heard this from my students; many of them would have rather just left the page blank. Even those who managed to put some words on the paper failed to make a grammatically correct sentence. Statistically speaking, out of the four language skills, students in my class received the lowest scores in Writing – often 1 to 1.5 lower than the band scores for Reading, Listening and Speaking. This trend is not only found in beginners’ class, but even students with a good command of English (including a fairly good knowledge of grammatical rules) still find writing intimidating. The question is obvious: Why are students so afraid of writing?

We write to express our IDEAS through the use of WORDS which are connected by GRAMMARTICAL STRUCTURES. Therefore, the ability to write, and to write well, is built upon three main components: ideas, vocabulary and grammatical knowledge. Difficulties in completing writing tasks, as a result, should be naturally attributed to a lack in at least one of the aforementioned aspects.

I decided to conduct a small experiment in my two of my classrooms: the elementary and intermediate class. I allowed my students to write whatever they wanted about a familiar topic: FAMILY, so their ideas will not be constrained. After a close inspection of their submissions, the answer started to reveal itself: Students find writing to be difficult because they take a wrong approach towards it. Almost all of the students in my elementary and intermediate classes use the TRANSLATION method in writing, that is, to think of ideas in their mother tongue (Vietnamese) before translating them word-by-word to English. This approach proves to be problematic in several ways:

1) When thinking in their first language, students have a tendency to think of more complex and abstract ideas.
Consequently, they are more tempted to use complex sentence structures. Trying to form complicated sentences with an unfounded grammatical background is a recipe for disaster. Despite their limited knowledge regarding grammar, more than half of the students in my elementary class wrote compound or complex sentences.

One example taken from my students’ writing:

“Because parents do not care children so children play with bad friends, therefore they commit crimes.” 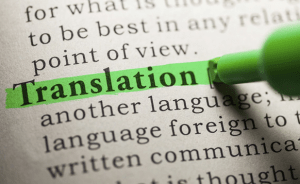 As a result, students believe they cannot write because of their insufficient vocabulary, and attempts to translate word-by-word often result in ambiguous expressions. For instance, while writing about the topic family, one of my students wrote:

“Parents should make mirror for their children.”

As a native Vietnamese, I immediately understood what the student was trying to say. In Vietnamese, “làm gương” means “set a good example/ be a good role model for someone”. My student broke down this expression word-by-word and translated each component:

As can be seen, direct translation completely takes away the meaning of the whole expression and causes confusion at the hearer’s end.

Students connect words using the rules they have acquired from their native language. It is often the case that these grammatical rules are not relevant in their target language (English).

Another example taken from my students’ writing pieces:

This is a direct, word-by-word translation from Vietnamese to English.

The process of translation distracts students from applying the grammatical rules they have previously learnt in English, so mistakes are made unconsciously.

In the next class, I talked to my students about their problem and offered them a solution. Getting rid of the translation method requires a better, more sensible approach to writing:

Think in English, write in structure.

This method requires students to come up with ideas in ENGLISH instead of Vietnamese. This can help them write even with a limited vocabulary range. For example, many students cannot find the right word in English equivalent to the concept “trụ cột gia đình” in Vietnamese. Instead of translating it word-by-word, students can express their ideas by giving a definition of the concept they are trying to convey. In other words, students make a connection between a concept and its definition rather than forming a connection between two equivalent expressions in two languages.

Writing using the translation method requires students to translate word-by-word from left to write. On the other hand, with the new approach, students need to think of the structures first.

Ex: Because parents do not care for their children, many of them play with bad friends.

Writing with a structure in mind simplifies students’ writing and helps them avoid making grammatical mistakes which derive from the translation process, including run-on sentences or sentence fragments. Additionally, students have more control over their grammatical usage instead of relying too much on grammatical rules from their mother tongue.

In the next stage, I provided my students with some popular sentence structures on which they were able to add their own ideas and vocabulary to complete their sentences. These structures ranged from simple sentences to compound and complex sentences.

After introducing this new approach to my students, their responses have been unexpectedly positive. Students feel like they are “in more control” during their writing process, and some report that they feel “less uncertain” when they write. Grammatical mistakes related to sentence structures still appear but at a significantly lower rate, and vocabulary errors have almost halved after students have gotten rid of the translation approach.

In conclusion, the factors behind student frustration about writing and their low accuracy rate can be attributed to their translation approach. After changing the students’ mindset and encouraging them to use another technique (“Think in English, write in structure”), the quality of their writing has improved noticeably. However, there are still some questions that call for open discussion. Please do not hesitate to leave your comments below!

Where I teach
Teaching Diverse L1 Learners in the Adult ESL Classroom
Book Review: Her Own Worst Enemy
Highlighting the Importance of Socratic Discussion
False Friends in the Dutch and Spanish Classroom
IELTS speaking – what is Cambridge looking for? Part 4 – Pronunciation.
Copernicus Hunts For Teachable Moments
How to Make Your Classroom More Gender-Neutral

Ha Dang Nhu Quynh is a Vietnamese English Teacher who has 6-year experience in teaching young adults from various levels and backgrounds. She holds a Bachelor of Arts in English Teaching from Ho Chi Minh University of Education. After working as a teacher trainee in Nguyen Khuyen and Nguyen Trung Truc High Schools, she is now an IELTS Reading and Writing teacher at a private center in Vietnam. Her research interests include Cognitive Linguistics, Educational Psychology and Materials Development.

by David Buckley For the last 20 years, there has been a sharp rise in the number of Chinese students taking the IELTS test…

We use cookies to ensure that we give you the best experience on our website. If you continue to use this site we will assume that you are happy with them.Ok