Creator of the Training English Skills System
by Sharyn Collins 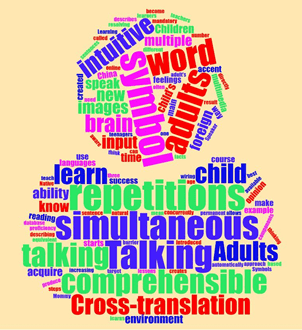 Hello Arkady, thank you very much for doing this interview. You seem to have had a very interesting life. Where did it all start?

Thank you. It’s a pleasure to share my experiences with your readers. Well, I believe I am a lucky person. I have lived two consecutive lives – one in the former Soviet Union (I call it black and white) and the second in the USA (I call it colorful).

How was life in the Soviet Union?

Education was free in the USSR; however, being a Jew, I wasn’t entirely free to choose my career path. There was a quota which dictated how many Jewish students could go to university and what they could study. I became a Doctor in Material Science and worked as head of a research laboratory at one of the largest enterprises in Moscow. I applied many times for open positions in other enterprises and was never invited for an interview because most of them had also a quota on the number of Jews.

How did you go from metals to languages?

During my years of work as a scientist and simultaneous interpreter, there was always a nagging question in my mind. I wanted to know why some people like me, learned foreign languages easily, whereas many adults struggled and often gave up. I started to experiment in my mind. Many years later I discovered that unknowingly I was following the approach of Nikola Tesla. In 1917 Tesla wrote: “When I turned my thoughts to invention, I found that I could visualize my conceptions with the greatest facility. I did not need any models, drawings or experiments, I could do it all in my mind, and I did.”

Did you find the answer to your question?

I not only found an answer to my question but it lead to an invention. First, I should explain why I believe the conventional teaching methods aren’t always successful for most adults and how I think my method helps people to be more successful with language learning.

1. In conventional methods the student learns language skills (reading, listening and speaking) separately while continuing to think in his native language. It is a typical example of passive learning when students are taught to consciously memorize language information. This method is historically unsuccessful.
2. The system that I have developed and patented is called Active Training English Skills; it consists of simultaneously learning all three language skills. This system automatically eliminates cross-translation and allows students to start thinking in a foreign language from the first lesson.

Could I continue by telling you how I was able to immigrate to America and start my second life.

Certainly. Why did you want to leave the Soviet Union?

I began to question many things and look beyond what we saw on central television. I started to become aware that there was another life for me and my family beyond the Iron Curtain. The term symbolizes the efforts by the Soviet Union to block its citizens from any contact with the West. I had applied 14 times to the Soviet authorities for permission to go as a member of a tourist group to any European country and 14 times the reply was “No”. Tourism was under the supervision of the KGB (the Soviet Secret Service), and it was available to some citizens but rarely to Jews.

From the day my daughter Elina was born, I spoke to her only in English. I knew that officially we could never leave the USSR, but I still wanted to believe in miracles: if emigration became possible, my daughter would be prepared for life in the West. When my second daughter Marina was born, I continued this effort: not a single Russian word with them, I spoke only in English. Being a simultaneous interpreter this wasn’t hard for me.

Until about five years of age, my daughters thought that all daddies spoke only in English and all Mommies spoke only in Russian. At about five years of age, Elina was shocked when she realized that I spoke Russian to other kids in the daycare center but not to her. At home we explained to our daughters the whole situation and that was their first lesson of doublespeak. Here is my definition of doublespeak: the ability to hold two completely contradictory belief systems – one belief system to express in the public and the second belief system that you can share only with your family and closest friends.

In 1985, I was fired from my work because a KGB agent, who was present during one of trade negotiations with a foreign company where I was working as the interpreter, decided that in my translation I was protecting the interests of a foreign country rather than interests of the USSR. A decade prviously, for such an accusation, I would probably have been sent to a Gulag but it was the Perestroika period when things were softening and I was simply fired and left without any income source.

At this point I started to teach English to private students. Many people who were dreaming about emigration were learning English in preparation of their dream actually coming true. Soon by the word of mouth I became known as a teacher who uses a new approach: this was my Language Bridge method; simultaneously reading the text, listening to the recording and speaking at the same time. The swift progress of my students ensured me a permanent flow of English learners. I managed to support my family for three terrible years while waiting for the permission to emigrate.

When did you finally manage to leave the USSR and what were your first impressions of your new country the USA?

In 1988 we finally left for the USA with a refugee status as people who had been forced to leave USSR in order to escape persecution. My first impression of America is associated with a feeling of being in a unique experiment in which I was born again but this time as an adult and in a wonderful country full of colors. I knew the language but I didn’t know the American realities. In my first visit to a Chinese restaurant after the first paycheck, we ordered too much food; the waiter asked me if we needed a doggie bag. I was surprised by the question and answered: “no, thank you, we don’t have dogs at home.”

What was your first job in America?

My first job was as an Information Analyst at Chemical Abstracts Service (CAS), the oldest and largest database of scientific information in the world. I worked at CAS for twenty years writing abstracts for articles and patents published in Russian, German, Polish, Ukrainian and sometimes French. I loved my work, but my creativity, suppressed in my previous life in the USSR was in full bloom now. I needed a new project on which I could work after my regular day-time job.

Carpal tunnel syndrome was a hot issue at that time; this is a medical condition which is caused by the inflammation the muscle going to the thumb that is linked to typing on non-ergonomic keyboards. I decided to find a solution to this problem and create a new design for a keyboard that would alleviate carpal tunnel syndrome. In 1990, eighteen months after I started my first job in the USA, I filed my first patent application for a new keyboard. This patent was licensed for the Microsoft Natural Keyboard in 1992. At its peak, it sold over 600,000 per month.

When working on your keyboard project had you taken a break from your fascination with language acquisition?

Absolutely not; my passion for languages was as strong as ever and I continued using my vacation time to work as a simultaneous interpreter. Periodically, I was invited to do some very interesting work as an interpreter at NASA. At the same time I was working on my first book and CDs for Russian immigrants to learn English. My first patent on learning languages was issued in 2002. The digital version of Active Training English skills was patented in US in 2017 and is patent-pending in China.

Can you tell us a little about why you believe your method could be effective?

To explain why the Active Training English skill is so effective, I need to remind you about two concepts, introduced by Nobel Prize winner Daniel Kahneman. In his book “Thinking, Fast and Slow,” Daniel writes that we think slow and fast because we have two different systems of the mind. System 1 operates automatically and quickly, with little or no effort and no sense of voluntary control. System 2 allocates attention to the effortful mental activity and therefore is slow.

If you learn a foreign language with the objective of using it to communicate, you need to develop it through System 1. That is why conventional methods of learning a foreign language, which belong to rote memorization (System 2), should be substituted with training English skills since it belongs to System 1. Driving a car, figure skating, playing a musical instrument, martial arts skills or speaking a foreign language are all skills trained through System 1. During training of these skills, the brain finds and records the patterns that it can perform after training without conscious effort and with minimal attention, i.e. effortlessly.

Where do you think your method fits into EFL teaching?

My objective was not to develop a method that would fit into EFL teaching but to develop a method which improve failure rate. My aim was to try to achieve 95% success rate for all learners. The transition from the current EFL teaching to the proposed Training English skills could be visualized as the transition from conscious memorization (system 2) of information about the language to subconscious training of English skills (system 1). To achieve this goal I hope that teachers will think about adding simultaneous reading, listening and speaking to the current curriculum and my app is available to help them.

Thank you so much for doing this interview and I look forward to trying out your method in the future.

Sharyn Collins has a degree in linguistics and speaks several languages fluently. She has worked as an EFL teacher for many years in countries including Bahrain, Oman, and Mexico. She now works as editor of EFlmagazine.com.

EFLtalks, talks for teachers, in keeping with the idea of producing new, creative and innovative methods of providing Continuing Professional Development (CPD) to…