If the title has shocked you, then I’m glad. If as a native English speaker (NS) you feel slightly offended, then I apologise, but I might have to continue being blunt.

It’s a delusion to think that any NS is by definition linguistically and instructionally superior to any non-native English speaker (NNS). And the ELT hiring system is largely based on perpetuating this delusion.

In fact, the two terms fail to describe the complexity and diversity of English speakers, and their continued use in the ELT industry antagonises teachers by creating a false dichotomy. It buys into cheap prejudices and stereotypes. It dupes students and parents into thinking in binary terms. All NNS = bad. Any NS = good.

It’s time we faced this delusion head on and put to rest, as Michael Griffin did in this article, the old question: “Native or non-native: who’s worth more?” posed by the great Peter Medgyes two decades ago. Instead, I propose that we start talking about what it means to be a good English teacher.

We should accept what most teacher trainers will tell you: your mother tongue makes you neither a bad nor a good teacher. Like the colour of your hair, it’s irrelevant. We need to speak out in favour of a new ELT industry, one that values professionalism, experience and qualifications instead of a mere accident of birth.

Why are we delusional?

If there’s one person we can trace our NS delusion to, it would probably be the eminent Noam Chomsky, who in the 1960s devised the concept of an “ideal speaker-listener […] who knows their language perfectly and is unaffected by such grammatically irrelevant conditions as memory limitations, distractions, shifts of attention and interest, and errors”. Obviously, that infallible and omniscient ideal was a NS.

It’s no surprise that the NNS started to be considered inferior (see Robert Philipson’s 1992, “native speaker fallacy”), or as Alan Firth and Johannes Wagner put it “a defective communicator, limited by an underdeveloped communicative competence”. This view has largely remained in place in ELT despite severe criticism from numerous linguists who came after Chomsky. For example, Thomas Paikeday calls NS “a figment of linguist’s imagination”, while Alan Davies refers to the NS as “a fine myth”, which is actually “useless as a measure.” For who is a NS indeed?

Imagine a recent immigrant to the UK, for example. They got their passport through marriage, but their English is only conversational at best. Are they a NS?

What about a Pole who’s spent years in an English-speaking country, went to university there, and speaks flawless English, but has only got a Polish passport. Would they qualify to be a NS?

Consider also somebody born of English speaking parents, who’s never lived in their parents’ homeland, speaks English only at home and did all their schooling in a non-English speaking environment. Are they a NS?

How about a French speaking Canadian from Quebec? Born in a mostly English speaking country, but their first language is French, not English.

It gets even trickier. Most ELT job ads (approximately 70% to be specific; see my own and Ali Fuad Selvi’s studies) require the candidate to be a citizen of one of the 7 countries deemed to be English speaking. Some go as far as listing NS as a qualification. Know of an MA in ‘nativeness’ anyone?

And this is not all. Some schools will hire “anyone who shows a genuine interest”. As long as they are a NS, of course. No experience or teaching qualifications required. This reminded me of Ruecker and Ives’ work which showed that ELT job ads tend to emphasise benefits (e.g. travel, exotic countries, good lifestyle, etc.) rather than experience, qualifications, or professionalism.

By the way, by NS the recruiter does not mean C2 level on CEFR. They want the passport. So the recent UK immigrant with conversational English and the French Canadian is qualified to teach. The Pole, despite their flawless English, is not.

In fact, this policy excludes a huge number of NSs from India, Nigeria, Zimbabwe and 51 other sovereign states that have English as an official language, but are not from the privileged 9, or “the inner circle” countries (see Kachru’s work for details). As a result the concept of NS has often been linked to race (for example, see Kubota’s study). For a concrete example of race-based ELT hiring policies in South Korea see this post by Michael Griffin. 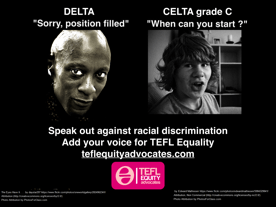 Giving up the delusion

As David Crystal put it in this interview:  “It is metalinguistic knowledge, combined with fluency, that ultimately produces the most efficient language teachers. Fluency alone is not enough.” Nor being a NS, I’d add.

Being a NS doesn’t guarantee infallible linguistic intuition or perfect pronunciation. No such things exist. In fact, official 2013 IELTS test results show that candidates whose first language was English scored 7 on average (9 is considered native-like or proficient).

As Peter Lahiff points out in this article, it is clear that the term NS is an unsound recruitment criteria. First, it doesn’t reflect the complex reality of English speakers and creates a false dichotomy. It also marginalises 80% of all speakers of English as inferior. Finally, it tells us little about the candidate’s linguistic competence, let alone their teaching skills. Several other much more inclusive terms have been proposed over the years and I hope that at least one of them sticks: mono/multilingual English speaker, proficient speaker, expert/fluent language user. 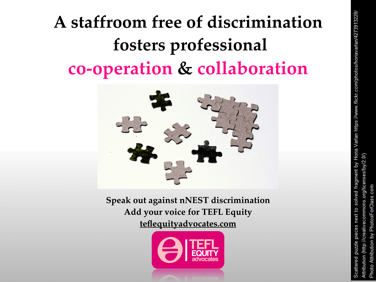 I can see numerous benefits of dropping the delusion. First, EU-based schools would stop breaking the law and risking being taken to court (yes, advertising for NSs is illegal, and yes, there are legal precedents).

Second, professionalism would be valued more. Competitiveness and with it quality of teaching would increase, which in turn could only be for the benefit and contentment of students.

And finally teachers on both sides of the divide could finally shake hands, embrace and be what they’re best at: English teachers.

Idealist, hold your horses there! What about the omnipresent and all-powerful market demand for NSs?

I hear you. It’s a topic for a whole new piece, but to do your doubts justice here, can’t the industry reshape the demand? Isn’t it pathetic that we subjugate our whole industry to the demands of those who know the least about learning languages?

I’m not saying students should have no say. To the contrary. But we’re not afraid to question numerous other misconceptions about learning languages students come to us with. After all, they come to us, because we’re the experts. So why not question the NS delusion too? And tell students they’re finally getting their money’s worth: the best of both worlds, English teachers – both NS and NNS – chosen based on merit, qualifications, experience and demonstrable language proficiency, rather than a mere accident of birth.

And do you really believe that all students always prefer any NS to any NNS? I know, you’ve heard them say it. But in my career, I’ve heard them say otherwise. They told me they want GOOD teachers, regardless of where the teacher’s from. And here’s the evidence.

How can we make this happen?

James Taylor wrote a very motivating article where he argued that we all have a responsibility to tackle NS favouritism and outlined in detail what each of us can do to support equality. Every action, however small, matters. Each of us could:

And above all, be open-minded and never look down on or up to somebody just because of their mother tongue. Value your colleagues for who they are as teachers and individuals, because there is a lot we can learn from each other.

Since graduating with a BA in English and doing the CELTA, Marek has taught English in six countries. He’s an IELTS examiner and holds DELTA, and is a PhD in TESOL student at York University. He advocates equal employment opportunities for non-native English speaking teachers through TEFL Equity Advocates and blogs about ELT on TEFL Reflections with Robert McCaul, who he’s also cooperating with on The TEFL Show Podcasts. You can find Marek on Twitter @marekkiczkowiak and @teflequity. He loves travelling, reading and meeting new people. He’s also a keen language learner himself and speaks six languages.”

. IELTS stands for International English Language Testing System. It is accepted by the governments in Canada, the UK, Australia, New Zealand, and South…